WordLift: a THING that MAKES us SMART

The title of this post is taken from Donald Norman‘s book “Things that Make Us Smart.” 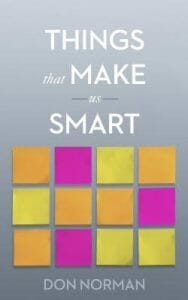 Donald Norman is a guru for all designers since his definition of human centered design, which explained how design can make people happier. Here is the link to one of his short presentations from TED in 2003.

Norman is also known to the public for books and manuals such as “The Design of Everyday Things,” which was perfectly summarized by a funny occurrence in Rome in a bus of the city transportation system.
Talking about “Things that make us smart“, Norman classifies humans in 3 categories:

It’s a flow that has shaped the funnel of human evolution: BUILD – USE – OBSERVE and vice-versa; these three attitudes follow each other in a recurrent, never ending process: for example, from the observation of how something is made or used, new ideas/products arise.
WordLift allows you to reproduce the virtuous funnel BUILD – USE – OBSERVE when creating content for your website. WordLift is a semantic web organizer, a new product for all bloggers that publish content on the web through the CMS WordPress. The software semi-automatically associates a group of metadata that translates all kind of content into a language read by machines, with the aim to increase the visibility of the information given to users and to make it easier to find it. WordLift allows you to BUILD the metadata of your content, USE them to increase its value, and OBSERVE the results to find new angles and new directions for your website and editorial plan.
WordLift is the result of over 10 years of “research and development”, applied to two EU funded research projects (IKS and MICO) by a team that since 1998 has:

WordLift is a technology that allows you to classify information: a knowledge organizer. The design approach that has informed its production stages is a derivative of Ergonomics, the discipline that studies the interaction between a system and its users.
WordLift classifies information to build and run dataset open (compatible with the LoD cloud), just the same way genes that make up the DNA give instructions to build and run our organism.

Classifications help us finding the things we are looking for. Classification systems are useful to organize knowledge as well. Shiyali Ramamrita Ranganathan, an Indian mathematician, introduced the fundamental categories of classification back in the first half of ‘900, identifying the ones valid for all disciplines:

They are almost identical, to the 5 Ws used in marketing or the 4Ws typical of content organization categories: Who, Where, When, What. These categories have been considered abstract until the emergence of new sciences such as Neurobiology, that introduced the models and patterns used by our brain to build up our memories and everything else we keep in our minds.
Once installed, WordLift connects directly to Schema.org, a vocabulary of concepts, widely used all over the web and made up of more than 1200 items collected in 9 essential categories: Action, Creative Work, Event, Intangible, Medical Entity, Organization, Person, Place, Product.
Those categories are grouped by the plugin to the 4Ws as followed:

A component of the software reads the content and automatically extracts concepts (Person, Organization, Local Business, Place, Event, Creative Work, Thing) attributable to the 4W from the text. The user has the option to add more concepts to those suggested by the application and to create its own internal vocabulary building his/her own sector’s wikipedia.
To check out how the plugin works you can watch the tutorial videos.

If all content on the web was published with this kind of technology, even the most unobtainable and beautiful objects would be part of one catalogue (or dataset), therefore findable, like a universal version or the “Catalogue of Unobtainable Objects” by Jacques Carelman, mentioned in the magazine Cosebelle.
The editors of Cosebelle magazine using WordLift would have the possibility to build their own vocabulary and open dataset across all the things and themes they deal with.
A dataset of beautiful things, of course, accessible, visible and understandable both by users and machines without stressing too much with search optimisation tasks.

Increasing both ranking and visibility of online content, while retaining the ownership of the data produced, is by no means a secondary goals for any web content creator: these are the goals pursued during all the stages of WordLift construction.
If you have been following Annamaria Testa’s blog from the very beginning, you already know it all about the theories and best practices of everyday-creativity.

Over time the blog has constantly increased its audience. Surely by virtue of the quality of its content which, if I had to define in just one word, I would say: exhaustive. It takes quality and experience to satisfy expectations year after year. It takes good writing, great titles, depth of content. Everything in the right place. If their posts were also published with the semantic web organizer WordLift, their vast content would be organized as in a digital library: becoming more accessible, and further increasing its value.

WordLift is one thing that makes us smart!