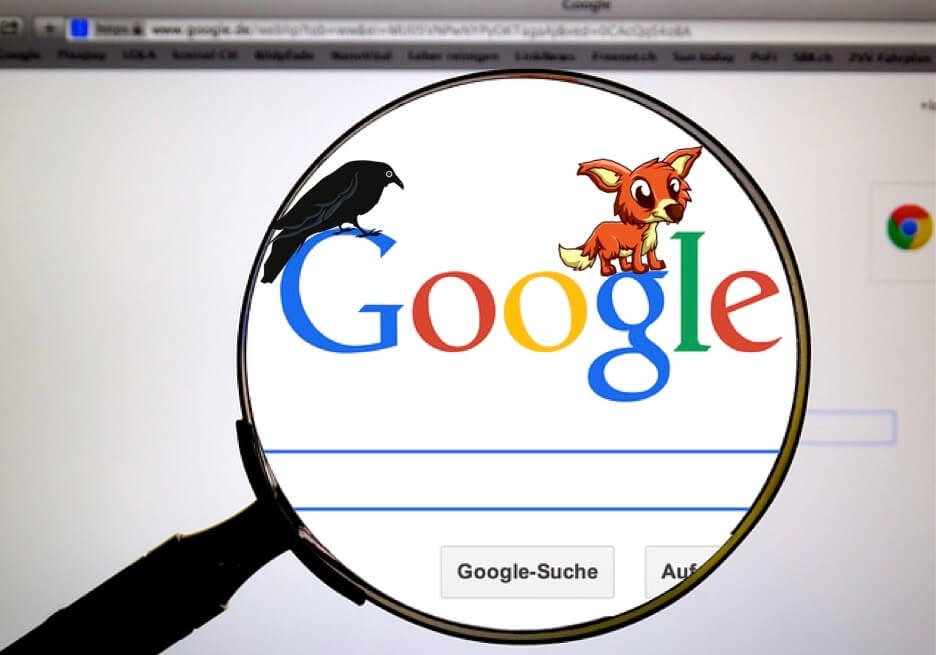 Posted by Gennaro Cuofano 3 years ago

When I started to write on the web I realized I was supposed to change my writing style if I wanted search engines to understand what I wrote. Yet semantic technologies allow our stories to be understood by search engines even though their authors manage to write them for humans only. How is that possible? Read on…

Once upon a time a crow was sitting on a branch of a tree with a piece of cheese in her beak when a Fox observed her and set his wits to work to discover some way of getting the cheese. Coming and standing under the tree he looked up and said,

“What a noble bird I see above me! Her beauty is without equal, the hue of her plumage exquisite. If only her voice is as sweet as her looks are fair, she ought without doubt to be Queen of the birds.”

The Crow was hugely flattered by this, and just to show the Fox that she could sing she gave a loud caw. Down came the cheese, of course, and the Fox, snatching it up, said

This is The Fox and the Crow, one of the most popular Aesop’s fables.

Written around the sixth century B.C. presumably by Aesop. Even though we don’t know for sure if Aesop ever existed. Those fables are a powerful narrative device. If you ever heard any of those stories, chances are you never forgot. Why?

Human Memory in a Nutshell

Human memory is slightly different from a computer’s memory. In short, we know there are certain parts of the human brain that play a key role in forming memories. Yet those regions work in unison with other parts of our brains to make those memories formed.

Like a symphony. Our memories get shaped by the interactions between billions of neurons, in a wild dance in which those nerve cells make synaptic connections. Those connections also become memories. The more neurons fire together, the more those thoughts become sticky. Psychologists like to summarize this process in neurons that fire together wire together.

If we looked at your brain with an MRI scanner – think of the MRI as a camera that takes pictures of your brain in action – while listening to a story, you would see several regions of your brain lighting up.

Although ancient people didn’t have MRI scanners, they understood what happened behind the scenes of the human brain. They already grasped the importance of metaphors as devices to create memories. Those memories could last for decades and get spread for millennia to come. Jumping from brain to brain they got tied together by metaphors. Yet it seems we have forgotten this lesson in the last two decades, when search engines took over the web. Ever since, keywords ruled over content.

Imagine Aesop was a literary author in today’s world. He has this great book in his hands, yet no big publishing house willing to sponsor it. What to do?

Aesop could self-publish that literary work. Yet he wants to test and see if there is an audience for it. Thus, Aesop creates a WordPress blog. That is the most logical choice, as he doesn’t have any coding skills – coming from Ancient Greece. Opening for the first time his internet browser he finds himself in a weird place. That place’s name is Google. From gurus to marketers Aesop is looking for inspiration. He dives in an article that tells him how to start a blog in ten steps, three somersaults, and a loop-de-loop. He seems very confused.

Finally, Aesop finds an article from a bold and bald man. That article has a magic formula inside. That is the formula to becoming the most known author in the Googlesphere. Taken aback by his ignorance Aesop finally learns about keywords!

Thus, in front of a ten-page how-to article on how to make his fables more “machine-friendly”, Aesop’s work goes to ashes.

What had happened? To make his content ranked, Aesop decided to convert all the metaphors and fables in keywords!

Thank god this is only a thought experiment and Aesop never made it through our times. Otherwise, we would have lost one of the most important literary works ever created. Yet if keywords were the rule of thumb in the last decades, can we expect to see a paradigm shift anytime soon?

In the last two decades search engines took over the web and they created a net for their own sake. This net revolved around the use of keywords. How could not be so? To make us find what we were looking for we had to adjust our thinking to fit that little quest box.

That is how we went from thinking out of the box to thinking within that narrow search box. That is also how we moved away from the why and more toward the how of things. The era of tutorials, how-to articles, and how to become a magician in ten steps arose. Is that era is close to an end? In part, it might be.

Since 2013, when RankBrain got launched, search engines are picking up. In fact, through NLP (natural language processing) machines now understand human language. Thus, we are finally going back to think out of that little search box into our human consciousness.

For instance, through our digital assistants, we ask more and more questions. In short, rather than using keywords, we now ask questions and we want an answer. The revolution though is that we now want answers not only from Google. But also from the websites that populate the web. Would you ever talk to a website that speaks in keywords? Of course not! Yet while it made sense a few years ago, it doesn’t anymore.

Search engines are becoming better and better at “interpreting” human language. They can extrapolate the information needed to answer our questions. Thus, make those blogs and websites speak to us.

Rather than make our text fit machines’ requirements (as it happened so far), finally authors, bloggers, and content creators can focus on writing stories. Metaphors and anecdotes, in this era, should be the rule. Rather than focusing all our efforts on keywords, we can finally go back to write for people.

While writing an article you can now focus on inspiring others while software like WordLift does the rest for you. For instance, within this article, I created a set of entities within my vocabulary, which explained to search engines what my article is about. In fact, by adding a schema markup to my article, I put search engines in condition to understand the content. Thus, without placing any keyword within the text I connected the fable to other concepts such as Google and Technology. You can see it from the schema markup I created through WordLift: 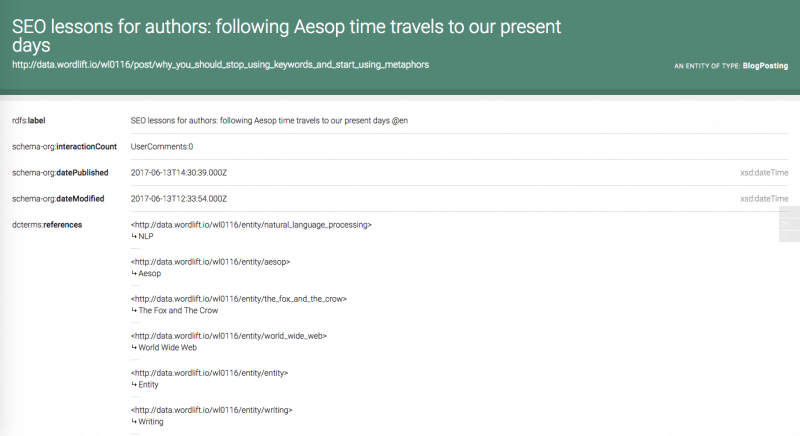 In the meanwhile, WordLift is also putting things into context by creating a knowledge graph. 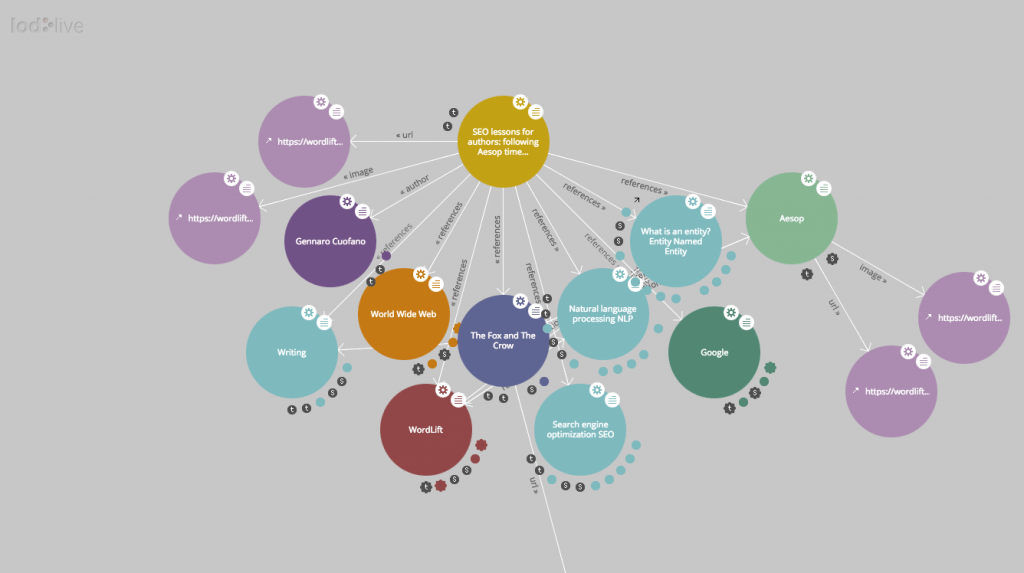 In other words, in a few seconds and without placing a line of code I achieved those results:

In other words, search engines are enabled to realize that The Fox and The Crow is a fable, but it was told in the context of SEO. Thus, by making this article unique.

In the last two decades, a new style of writing was born. A style based on 200-pages long how-to-articles. Most of us caught into this game. We also thought we determined it. The truth is we never chose it. It was imposed on us. In fact, that style was (in part) born from the necessity to make search engines understand our content. Either we did that or we were out of the web. The price to pay was too high. Therefore, we started to write dry content, mainly based on keywords to make sure it was ranked. In the meanwhile, we lost track of ancient wisdom.

Over two thousand years ago people already knew the importance of fictional stories. In the last decade, neuroscience confirmed that our brain likes those stories. In short, the human mind does not want the truth to be given on a silver plate. Our mind wants to dig, interpret, wonder and visualize before getting to the truth.

Now semantic technologies allow us to tell stories, fables, and anecdotes again. The web doesn’t have to be a dry land but it can finally become a place of wonder.