In the shadow of Anulu 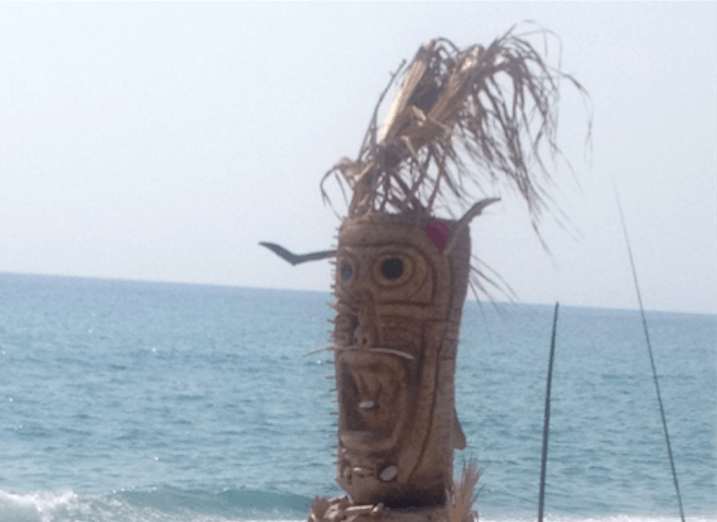 It’s been a surreal August 2016; assuming surreality exists. It’s been decades since the disclosure of techniques about imagination: customs and traditions of the mind to shape our personal worlds and build positive events for ourselves. But given the success among people of visual by-products, we can state that there is no difference between reality and surreality. A notorious thinker, associating true/false (maybe Nietzsche) once said: truth doesn’t exist, reality is perception. And the creative ones, of point of views, don’t they appear surreal at the eyes of others when they are shared? Acceptable visions, as most people call them, but it’s not what I see!

A month ago, July 2016, there was a little group of children near the place where I’m writing from, and the grown-ups, parents or not, getting close to each other (I’m not sure why) were asking themselves: what will they write in their back-to-school essay assignment titled “what did you do during the holidays?”. They were feeling that the situation was getting out of hand and becoming irrational already, just a few days into their summer break.

Finally a summer of un-named stars, of clouds passing by that don’t resemble anything, of tired weather forecasts, of stories, encounters and clashes handled with the energy of a sloth. As always, there were daily ritual confrontations though: both verbal and physical.

We are at the beach, it used to be more isolated before. It gathers random people, locals and foreigners. A cabin is the collection point; built to be good, homey. Its shadow offers some relief to its guests. Near and around more modern shelters and a trivial space dedicated to fire, during a month, August, always above 30°, including at night.

Besides the “passers-by”, at the cabin there are a few usuals: sorcio, rana, and paperello. The usuals sweep, embellish, order and scrutinize, far and close; once everything is calm, they entertain themselves and the passers-by.

Paperello, right on August 1st, from a palm trunk brought there by the sea, created ANÙLU, baptizing the first pagan totem in the area. He built a pedestal and a core to erect it, and positioned it looking east, between the cabin and the sea. Immediately the environment turned into a space, the beginning of a human recognizable order, an explosive un-directional zone typical of the first post-caveman’s villages. Flies arrived soon-after, for duty to report. Meanwhile, someone started talking about the “God ANULU”. Exaggerating: there is always a cult and someone who overreacts. But it is a known fact that the shoreline is also a path for pilgrimages: from morning to evening, young and old, back and forth. People started noticing and stopping by. Coming back the following day with their smartphones for the unmissable selfie, laughing unaware.

At the end of August someone dared to say that 3000 selfies had been taken, with the help from MANITA, another pagan totem, newer, embossed on another piece of palm trunk with the help of Rana. Without pedestal this time, it is self-standing. About the relationship between the totems, rumor has MANITA as the daughter of ANULU. 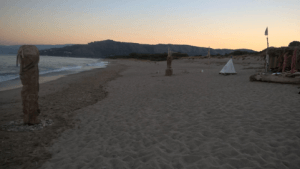 The cabin upstream, the sea in front, the father totem in the right half, the daughter totem closer to the sea in the left half, they marked together the free path, street or square toward fresh reliefs. This is where everything happened.

In a context like this, different manifestations of the matter can appearo: hot, competitive, airy, spiritual, almost esoteric; but always real. Many of them look like they just stepped out of the Peanuts, including the dazed observing dog; or read in Alan Ford, a comic about secret agents that became famous with number 26, when the alcoholic menace “Superciuk” showed up; or out of Castaneda’s books, where evening and nocturnal discussions were anticipated by him saying that there are not two separate worlds, two different realities, a normal world and a paranormal world… but only one world, that you can “look at” or “see”; or out of Tex Willer, wise navajos leader, eagle of the night – a legend; or resembling other comic characters, like Poldo Sbaffini (Popeye), trickster, flatterer, eternally hungry and hamburger craver; or Bongo the gorilla (from the Italian comic Nonna Abelarda), which communicated with sentences written on banners instead of the classic cloud. Fumettologica.it’s blog posted at the end of August the latest cover of Zagor-te-nai, the spirit with the Hatchet. Rana dared to feel and describe himself as Zagor, and dared also to say it out loud. There were a few Indians here and there; maybe that’s what confused him. In a few words, normal people from real life, characters of a bigger story. 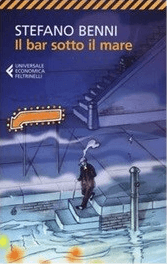 It was like reading a book titled “The cabin on the sea”, something like Il bar sotto il mare, by Stefano Benni, “where everything can happen…where all of us want to be”.

You might not believe me, I know. We spend half of our life laughing at other people’s beliefs and the other half believing in what other people laugh at. I often read the blog Scratchbook.net, where Maria De Biase tells us of books, authors and characters playing between truth and fiction. In one of her latest post, she introduced Nausea by J.P. Sartre, and the difference between what’s internal and what’s external in a context made of an absurd life. While I was reading the post, father ANULU and daughter MANITA were still there: enclosing, observing and protecting their space and whoever came to do daily ablutions. Passers-by were increasingly intrigued by the religious paganism of the situation.

Today is the last day of August 2016; at the cabin there is only a woman wearing a mask, who dove to look for heart-shaped stones. She gathers and collects them. Will she classify them? Will there be an order understood by both machines and people to collect heart-shaped stones?

A Japanese writer, Marie Kondo, known for her book “The Life-Changing Magic of Tidying Up: The Japanese Art of Decluttering and Organizing,” suggests a method to organize our life organizing our surroundings. Following a similar approach, if you write a blog and you want to share your passions, you should re-organize your blog into an open dataset, adding a classification system to your personal diary, enhancing the value of your thoughts, your attentions and the objects you care about. For example, if you write a deep study in your blog about the world of comic books, those should be classified and organized in open datasets and presented to the web and to readers according to how machines, search engines and our personal memory work, making it easier for our comic books to be found and read.

If your blog is on WordPress, you can download the plug-in WordLift and it will take care of this task for you. WordLift is a web organizer for professional online publishers, that automatically makes your diary (blog), and all the emotions, interests, pictures, memories, hobbies, advices it contains, as well as your life, accessible to machines, search engines and people.

WordLift is the best solution to rearrange our digital expressions, to make them readable and sharable, associating them to similar content. To do so it follows the same schemes our mind uses to build our memories and classify our knowledge and the same classification models used by common knowledge platforms such as Google and Wikipedia. It could classify and further enhance our comic’s characters and superheros, attaching to them a layer of metadata answering the following questions: where? …  when? …  who? … what is it? … what is it connected to? … what deepens it? … building the quintessential network of comics any comic book publisher dreams about.

P.S.: the nickname Sorcio, Rana e Paperello (and several of the non-quoted passers-by) are taken from the series pupazzocriminale.it.