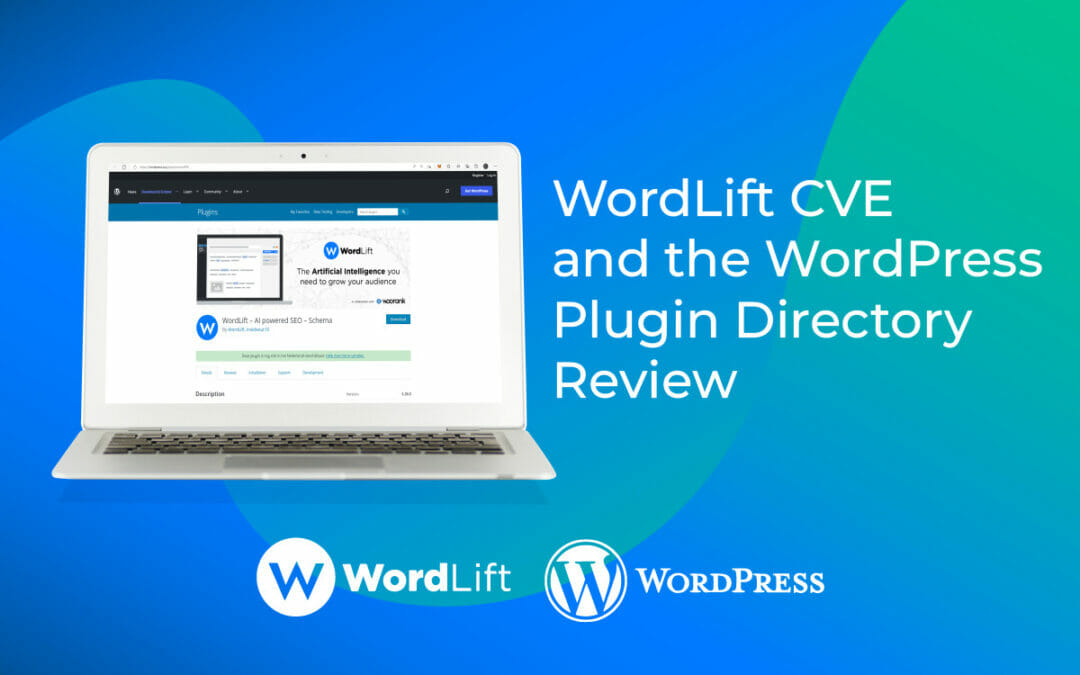 By David Riccitelli 3 weeks ago

Learn more about WordLift security and how we got back into the WordPress plugin directory by releasing a patch version and doing a full code review.

WordLift 3.37 was temporary removed from the WordPress plugin directory, between the 22nd of August until the 7th of September 2022, in response to a security report. The critical level was considered low, however we immediately released a patch version and we followed up with a full code review to tighten the plugin together with the support and feedback of WordPress volunteers. On the 7th of September WordLift was reopened with version 3.38.0.

The WordLift Plugin for WordPress is our most developed and used client of the WordLift platform.

The plugin development started more than 10 years ago as an experiment into bringing the power of the Semantic Web into WordPress and republish the data as Linked Data in order to boost the website SEO.

Since then we pushed more than 250 releases to the WordPress Plugin Directory, adding new features, supporting new WordPress versions and features and we grew to hundreds of customers using it to get more visibility on the SERP.

On the 22nd of August we received a message from the WordPress Plugin Directory volunteers about a security report related to the WordLift Plugin 3.37, which would allow a WordPress administrator to insert html code in a WordLift configuration field.

The original description of the issue:

“The plugin does not sanitise and escape its settings, allowing high privilege users such as admin to perform cross-Site Scripting attacks even when the unfiltered_html capability is disallowed.”

Further details about the report are available here (CVE) and here (WPScan).

Because only an administrator could exploit it, the critical level of the security issue was considered low and we immediately pushed a patched version of the plugin to the WordPress Plugin Directory.

The full review was deemed necessary because the initial report meant that WordLift is getting more traction, a larger customer base and may be considered a target.

Other plugins like Yoast and RankMath have already 11 and 2 security reports each (last update, Sep 8, 2022).

Soon after releasing a patched version, we worked with the WordPress team of volunteers to do a full review of the plugin and tighten its security between the 22nd of August and 7th of September 2022.

We decided to take Jetpack as a reference for the review of WordLift plugin. Jetpack is a flagship plugin by Automattic and one of the most popular and used plugins. And like every WordPress plugin published in the directory it’s open source.

We looked at how Jetpack validates its code (or “lint” in technical jargon) and found a set of helpful rules that would scan the whole WordLift plugin to report from the critical issues to the formatting issues.

So we ran the scan on WordLift and found quite some space for improvement (E means error):

It took us about 2 weeks and 6 intermediate reviews by the WordPress volunteers team and 941 files changed, 39228 insertions, 35844 deletions to get down to this (dot means no errors):

After the final review, on the 7th of September, the plugin was reopened to the public.

A lot has changed since we first published the WordLift plugin to the WordPress Plugin Directory 10 years ago.

We were already in the process of restructuring our team to provide a better care to our WordLift plugin and this event gave us more stamina to move quickly forward with the following actions:

When was the WordLift plugin developed?

Is WordLift plugin being removed from the WordPress Plugin Directory?

What is the WordPress Plugin Directory?

What is a CVE?

CVE, Common Vulnerabilities and Exposures, is a list created in 1999 which gathers all the known vulnerabilities about software. Later it evolved into a program “to identify, define, and catalog publicly disclosed cybersecurity vulnerabilities”.

WPScan is a security scanner for WordPress websites.

Jetpack is a flagship plugin created by Automattic providing a comprehensive set of features to WordPress.

Automattic is the leading company behind WordPress and owner of wordpress.com.

What does “lint” mean?